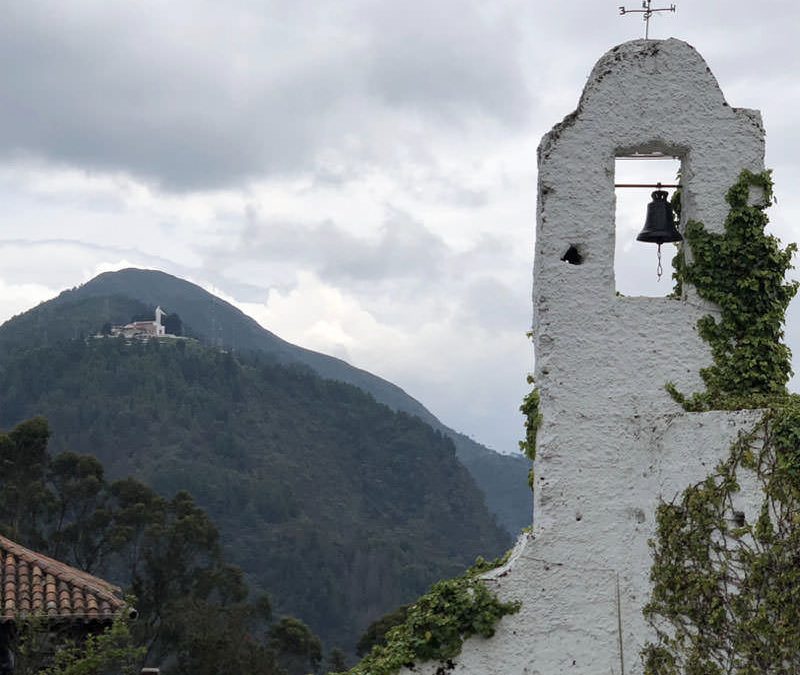 We recently completed a 9-day trip to Columbia with our youngest son Dustin. He served an LDS mission in the Bogota North area in April 2015. During this last USU spring break we were able to accompany Him on a return trip to visit Bogota, Barranquilla and Cartagena.

While in Bogota we visited Monserrate.

Monserrate (after Catalan homonym mountain Montserrat) is a mountain that dominates the city center of Bogotá, the capital city of Colombia. It rises to 3,152 meters (10,341 ft) above the sea level, where there is a church (built in the 17th century) with a shrine, devoted to El Señor Caído (“The Fallen Lord”).

The hill, already considered sacred in pre-Columbian times when the area was inhabited by the indigenous Muisca, is a pilgrim destination, as well as a major tourist attraction. In addition to the church, the summit contains restaurants, cafeteria, souvenir shops and many smaller tourist facilities. Monserrate can be accessed by aerial tramway, a funicular or by climbing, the preferred way of pilgrims. The climbing route, however, had been indefinitely closed due to drought, and the associated wildfires and landslides. It was reopened in 2017.

All downtown Bogotá, south Bogotá and some sections of the north of the city are visible facing west, making it a popular destination to watch the sunset over the city. Every year, Monserrate and its neighbor Guadalupe attract many tourists.

On Monday we visited the Catedral de Sal in Zipaquira

Zipaquirá (Spanish pronunciation: [sipakiˈɾa]) is a municipality and city of Colombia in the department of Cundinamarca. Its neighboring municipalities are Tausa and Cogua to the north; Nemocón, Gachancipá and Sopó to the east; Cajicá and Tabioto the south; and Subachoque and Pacho to the west. Its seat of municipal government is 49 kilometers from Santa Fe de Bogotá. It is part of the Greater Bogotá Metropolitan Area, and is the capital of the province. It is also the headquarters of the diocese of the same name and that includes much of the Department of Cundinamarca, extending to the centre of Bogotá, the region of Rionegro, the Ubaté Valley, and the region of Guavio.

The town is primarily known for its Salt Cathedral, an underground church built inside a salt mine in a tunnel made as result of the excavation of the salinas. Zipaquirá has an original architecture, and the old city centre is a tourist attraction. Its main square is surrounded by old buildings in the Spanish Colonial style. This small city can be reached by train from Bogotá.

After visiting the Bogota Temple Tuesday morning we caught a flight to Barranquilla on the Northern coast.

In Barranquilla we visited the new LDS temple site were this temple will be dedicated in Dec 2018.

We also visited a region called Kilymadiaro, which hosted a wonderful restaurant and beachfront.

This was a shrimp and mushroom dish with queso and plantain that was muy delisiosa.

Next we visited Cartagena which boasts the best Colombian beaches and an old city founded in the early 1600s that was charming.

The final stop on out trip was a small settlement about 3 hrs North of Bogota called Villa De Leyva.
Villa de Leyva, also called Villa de Leiva, is a touristic colonial town and municipality, in the Ricaurte Province, part of the Boyacá Department of Colombia. The town is located 37 kilometres (23 mi) west of the departmental capital Tunja. It is “three and a half hours by car or bus from Bogotá.”[1]

Located away from major trade routes in a high altitude valley of semi-desert terrain, and with no mineral deposits nearby to exploit, the town has undergone little development in the last 400 years. As a consequence, it is one of the few towns in Colombia to have preserved much of its original colonial style and architecture: the streets and large central plaza are still paved with cobblestones, and many buildings date from the sixteenth century. This has resulted in Villa de Leyva becoming one of Colombia’s principal tourist attractions, and it was declared a National Monument on December 17, 1954 to preserve its architecture.[1] The town and the surrounding countryside, which contains several sites of interest, are popular weekend destinations for citizens of Bogota, and attract an increasing number of foreign tourists.

We visited the Terra Cotta house built by a Colombian artist wanting to live a simple life.

One of the Beautiful gardens close to the town square.

A great visit to a Beautiful country. Would recommend you take a guide.